The online marketing community can’t stop talking about iOS 14 and its purported impacts on Facebook advertising.

It’s undoubtedly a massive change – but is it really the end of Facebook ads, or is it just another hoop that marketers have to jump through?

In this post, we examine the impact of Apple’s new privacy controls on Facebook’s ability to track users, and whether there are any solutions.

No. Whilst this policy will have a huge impact on Facebook ads, there’s no reason to panic.

Whilst it’s too early to tell the true impact of these changes, we’ll most likely see a reduction in the efficacy of retargeting and highly-targeted campaigns, and a greater reliance on traditional advertising methods

Prior to the release of Apple’s latest iOS, iPhone users had their activity tracked if they had Facebook installed on their phones across other apps like Safari.

This allowed advertisers to track which websites and apps they visited and used, and then target them with specific adverts across Facebook, Instagram, and the Facebook Audience Network.

Upon the release of Apple’s iOS 14 (expected soon), users will have to manually opt-in to being tracked. Furthermore, Apple has also put into place a limitation of the number of events that can be tracked per website. 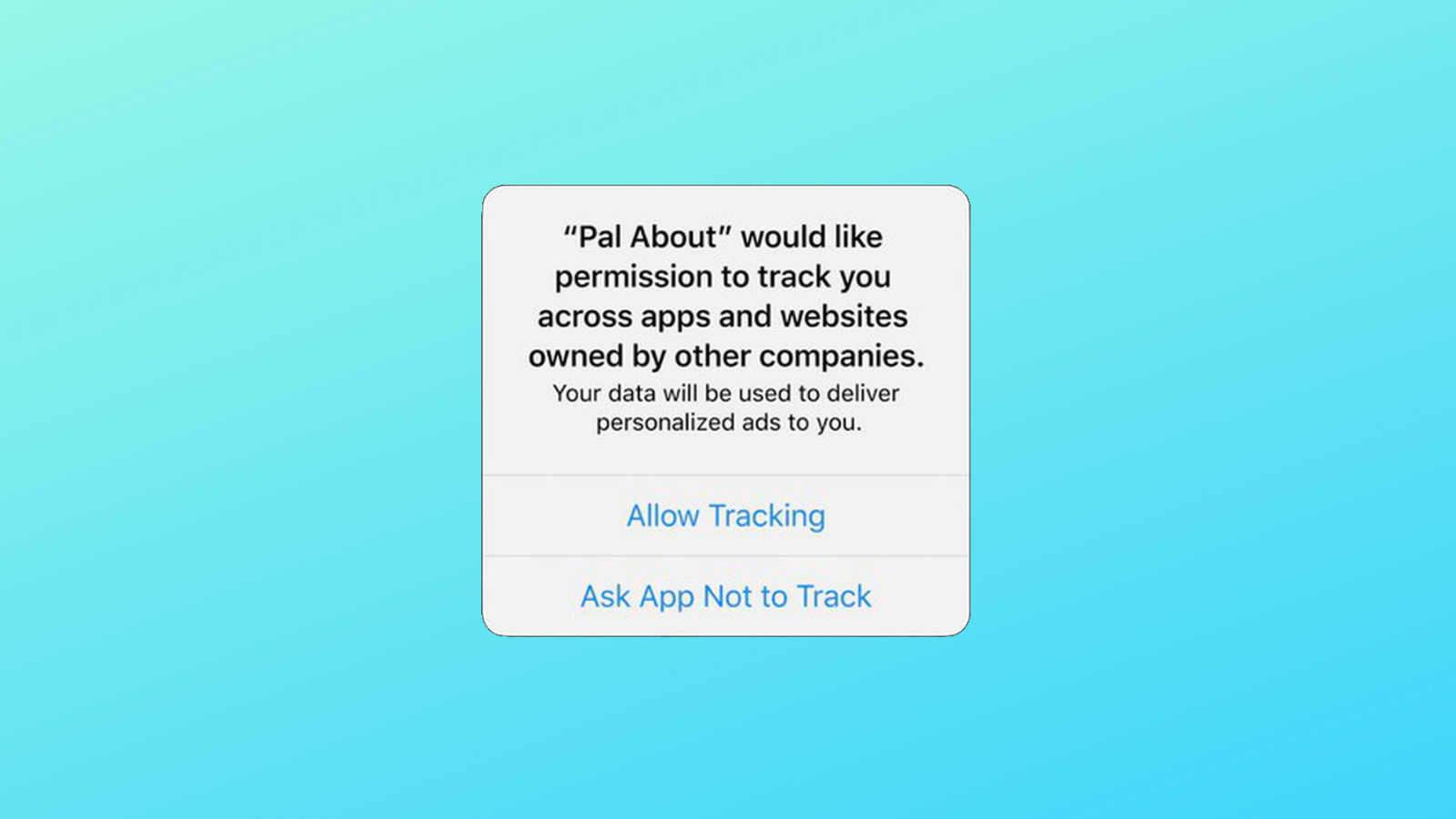 … and has this had any effect?

Truth be told: it’s too early to tell whether these changes have had any effect, and it will be a long time before we find out.

As Apple slowly releases its new iOS, it could take a full year for everyone to update their phones, and choose whether or not to give permission to Facebook.

Before we discuss the potential effects, it’s important to investigate whether Apple’s prompt will actually cause people to stop Facebook tracking them.

We have two previous examples of widespread ‘opt-ins’ that can inform this investigation: granting apps permissions to track your location, and permission to send push notifications.

According to a study created by Airship, more than two-thirds of users worldwide opt-in to push notifications from apps.

While this actually represents a decline in the opt-in rates over the previous year, it indicates a willingness from consumers to accept opt-ins prompted by the app.

However, this must also be seen in light of the number of apps that require push notifications to function effectively such as messaging apps like WhatsApp or Instagram, or delivery apps such as UberEats.

It found that only 7.7% of users worldwide grant permission for apps to track their location (at all times).

This is an interesting insight as it indicates that users are more concerned with their privacy than the intrusion of push notifications.

Will people opt-in to being tracked?

The above figures would suggest a low willingness for users to be tracked or to opt-in where there is no obvious benefit.

Interestingly, unlike other opt-ins, Apple has indicated it will give apps space to ‘explain’ their request:

We believe users should have the choice over the data that is being collected about them and how it’s used. Facebook can continue to track users across apps and websites as before, App Tracking Transparency in iOS 14 will just require that they ask for your permission first. pic.twitter.com/UnnAONZ61I

However, it is safe to assume that fewer than 50% of users will opt-in to being tracked.

This represents a massive loss of data for Facebook and for advertisers and a loss of ability to re-target users. But this also represents a bigger issue.

In theory, this could result in:

Here’s where things get a little more interesting.

There are two reasons why this issue has received so much publicity:

Facebook has made no secret of its displeasure at Apple’s move. They’ve taken out full-page adverts in major newspapers, produced multiple blogs, and warned every Facebook marketer of the impact of the move in one of the brand’s largest-ever PR offenses. 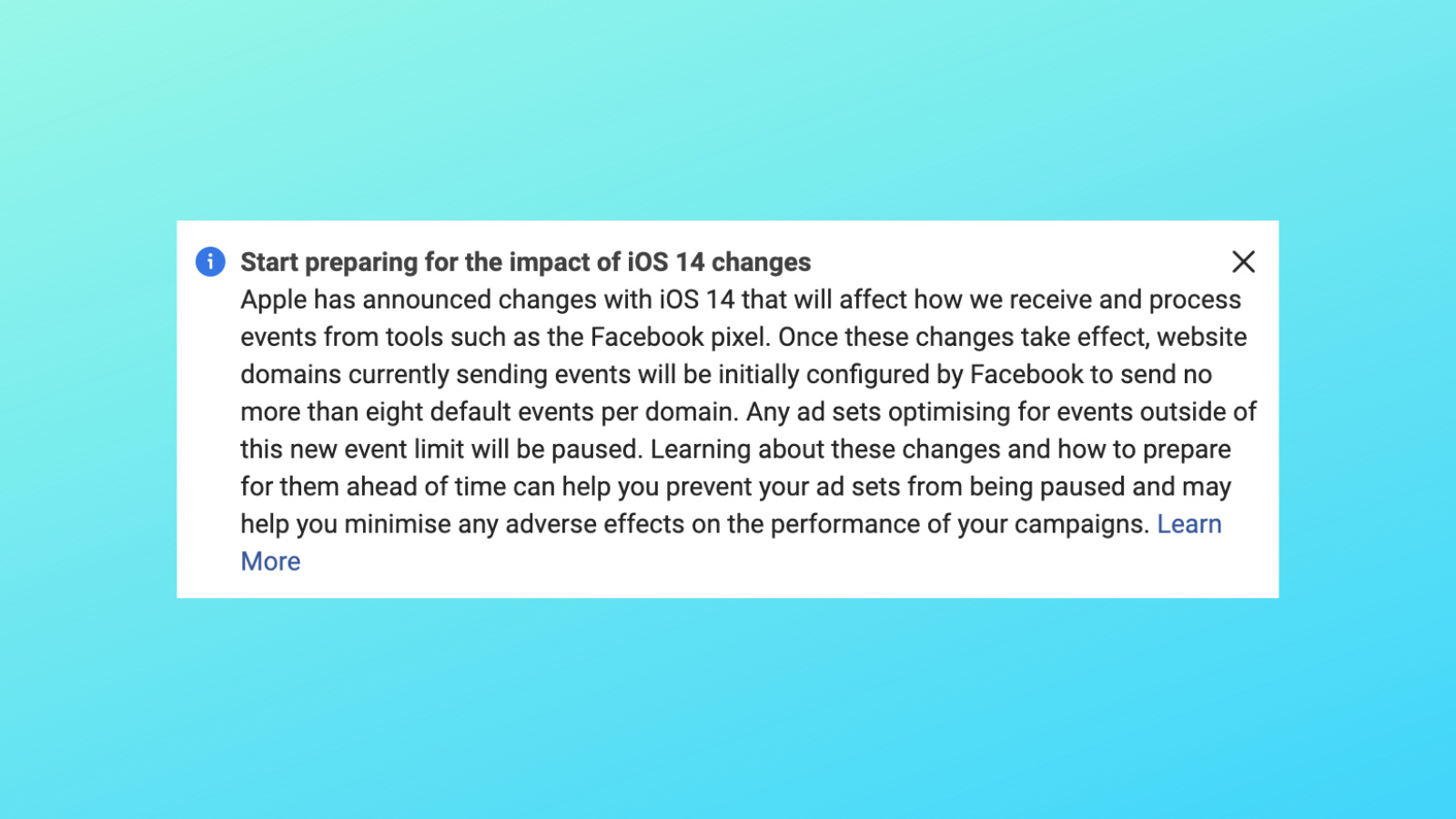 Whilst Facebook’s anger may be cause for concern, it’s important to see this in light of the longstanding-feud between Facebook and Apple on the subject of privacy: the respective CEOs of each company, Mark Zuckerburg and Tim Cook have called each other out publically multiple times in the past few years.

In 2014, Tim Cook made a veiled reference to Google and Apple’s use of its customer’s data, repeating an oft-quoted expression:

“A few years ago, users of Internet services began to realize that when an online service is free, you’re not the customer. You’re the product.”

“A frustration I have is that a lot of people increasingly seem to equate an advertising business model with somehow being out of alignment with your customers… I think it’s the most ridiculous concept. What, you think because you’re paying Apple that you’re somehow in alignment with them? If you were in alignment with them, then they’d make their products a lot cheaper!”

This animosity could have disastrous consequences for Facebook in the long-run: it is an application that almost-exclusively relies on advertising revenue, unlike Apple which makes money from the products it sells. So it’s entirely likely that Facebook is using this as a test case for future invasions of its business model.

However, this doesn’t negate the potential impact, and Facebook has also publically admitted that the move could slash at least 50% of its Audience Network revenue.

The digital marketing space is full of ‘experts’, blogs, and Instagram accounts full of predictions, doom, gloom, and speculation.

Undeniably this change will have an impact but currently, all we have is conjecture and so the most scandalous claims about the impact are the ones most likely to receive the most attention.

Of course, this is just another blog… so don’t take our word for it.

How can I minimize the effect of this?

Whilst we don’t know the exact effects of this change, there’s nothing to stop putting into place preventative measures or steps to counteract the change.

Here we’ll suggest some of the most important things you can do to continue to advertise effectively.

It’s the least technical but one of the most important things you can do to protect your marketing efforts: to stop relying entirely on Facebook advertising. Even before the change, Facebook was becoming less and less effective as a platform as it became so easy to trigger ad account bans.

Now is the time to re-invest in unfashionable marketing methods such as SEO or email marketing: these remain effective tools to drive traffic and are less beholden to major policy changes (even email marketing escaped the worst of GDPR).

And while few platforms can beat Facebook for the sheer volume of traffic it can send, or the re-targeting options it can provide, up-and-coming platforms such as TikTok are becoming increasingly popular with marketers.

One of the few benefits of the potential of a mass exodus of advertising revenue from Facebook is that they might actually start to treat their customers with respect.

Do you know the percentage of your traffic that comes from mobile? And of this, which comes from Android as opposed to iPhone?

One of the first steps you should take is to ruthlessly analyze your Google Analytics data and existing Facebook campaign data to ascertain these facts.

Verifying your domain is quick and easy to do: simply update your .TXT records or upload an HTML file.

Prioritize the events that matter most to you

Whilst many advertisers don’t optimize or report on more than eight events per domain, if you do, select those which matter most and have the most impact on your business.

Make sure your Dynamic Product Ads are optimized for one event per catalog.

From late January 2021, the following attribution windows will be available:

In lieu of available data, it may be useful to install a post-purchase survey on your website to either inform your future marketing or validate any existing data you have.

Facebook’s CAPI – conversion API – allows you to send conversions directly from your server to Facebook and vice versa.

Please note this is most relevant for Shopify users.

What is Copy Paste Agency?