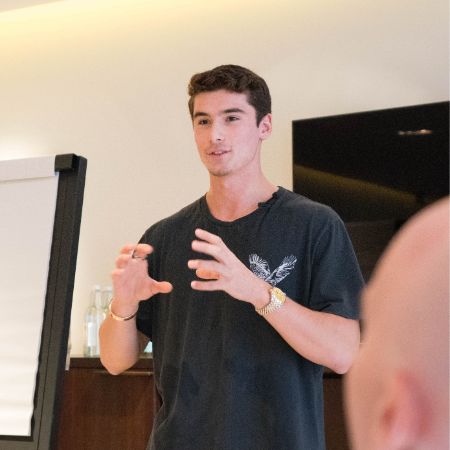 My name is Iman Gadzhi

Hi, my name is Iman Gadzhi and I’d like to share my life story & the birth of growyouragency.com

Before we start, there’s one thing I want you to bear in mind: I’m on a mission to reform the education system. It’s a mission that governs every decision in my life. You’re about to find out why…

My story starts in a little town in South Russia called Dagestanskiye Ogni.

I was born there to a single mother – my father, an abusive alcoholic, left long before I was born.

We lived together in post-Soviet Union poverty, and my mother – my best friend and hero – worked three jobs to take care of me – so I spent most of my time with my grandma. 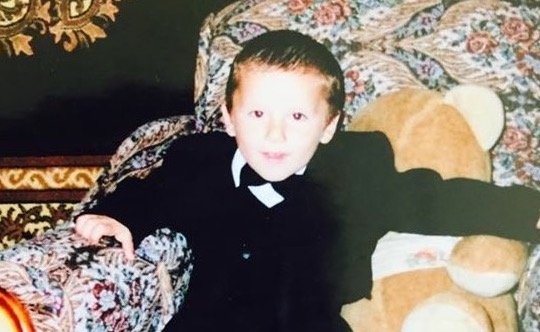 One day my mom came home and told me we were going to live in London. I didn’t understand what this meant but soon took my first ever flight and landed in Great Britain.

This incredible turn of fortune came as my mother got together with my step-father – they had met in Moscow and dated for a few months, and he’d decided he wanted us to live with him in London.

So in the space of just one month, everything changed for us. We went from not even having a toilet inside our house, to living in one of the most exclusive areas in the city. I ended up going to an elite private school and living a life that was unimaginable for my mother only a few months ago.

Of course, if this was where the story ended, you wouldn’t be here, this website wouldn’t exist and I’d be at university right now on the same path as all my friends.

Very quickly, my idyllic childhood started to fade. My mother separated with my step-dad and we were plunged back into our old lives: he cut us off entirely.

At the age of fourteen, I was faced with an awful burden: taking care of myself and my mother.

So I start my first business…

Despite a childhood dream compelling me to make it as a professional footballer, I realized, aged 15, I simply wasn’t good enough.

It was time to find another way to make money.

So I started on Instagram. Buying and selling accounts. I made a decent amount of money for a 15-year-old too! And then, in one bad decision, managed to lose it all by investing in one account that failed dramatically. 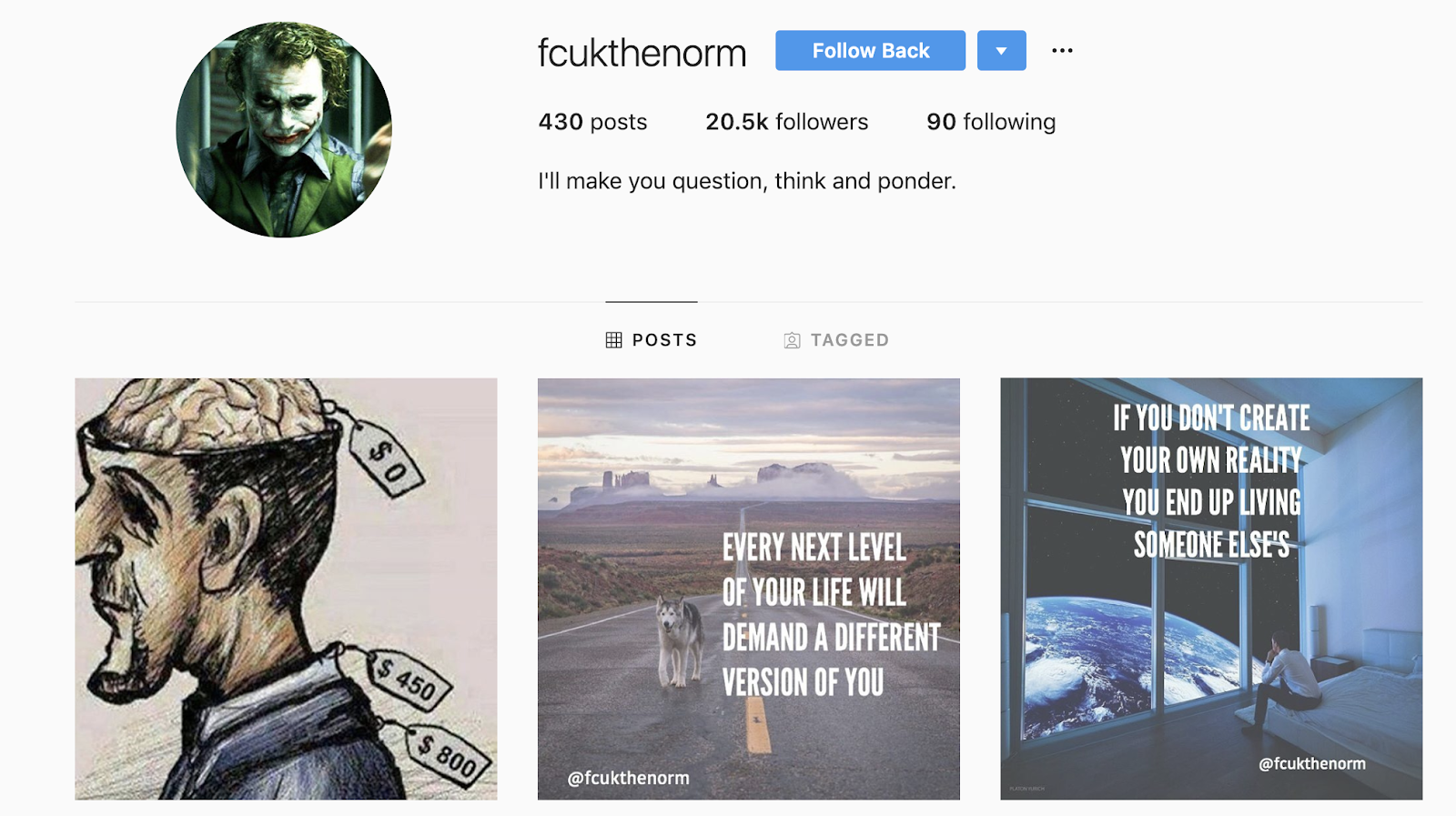 Undeterred, I set about desperately trying to find new ways to make money. I had a real love for fitness and would spend days and nights studying personal training manuals, then pestering my friends’ parents to let me train them!

I made a couple of hundred pounds a month doing this and thought I was a true businessman. So I invested in myself and bought my first ever camera: a £400 Canon.

I used and abused that thing, set up shoots anywhere I could find them and tried to learn a new craft.

Meanwhile, I had another brainwave. I was still playing semi-pro football at this time and, knowing a bit about social media, had always told the owner of the club how poor their channels were and how I could do a better job.

He said – ‘Okay Iman, why don’t you manage our content & social media?’

And before I could say yes, he said ‘And how much would that cost?’

How much would it cost? I had absolutely ZERO idea that you could charge companies to manage their social media.

So I absolutely shit myself and told him I would get back to him on that.

I racked my brains, did a tiny bit of research settled on the grand sum of £75 a week. Yes… my first every agency client was £300 per month. 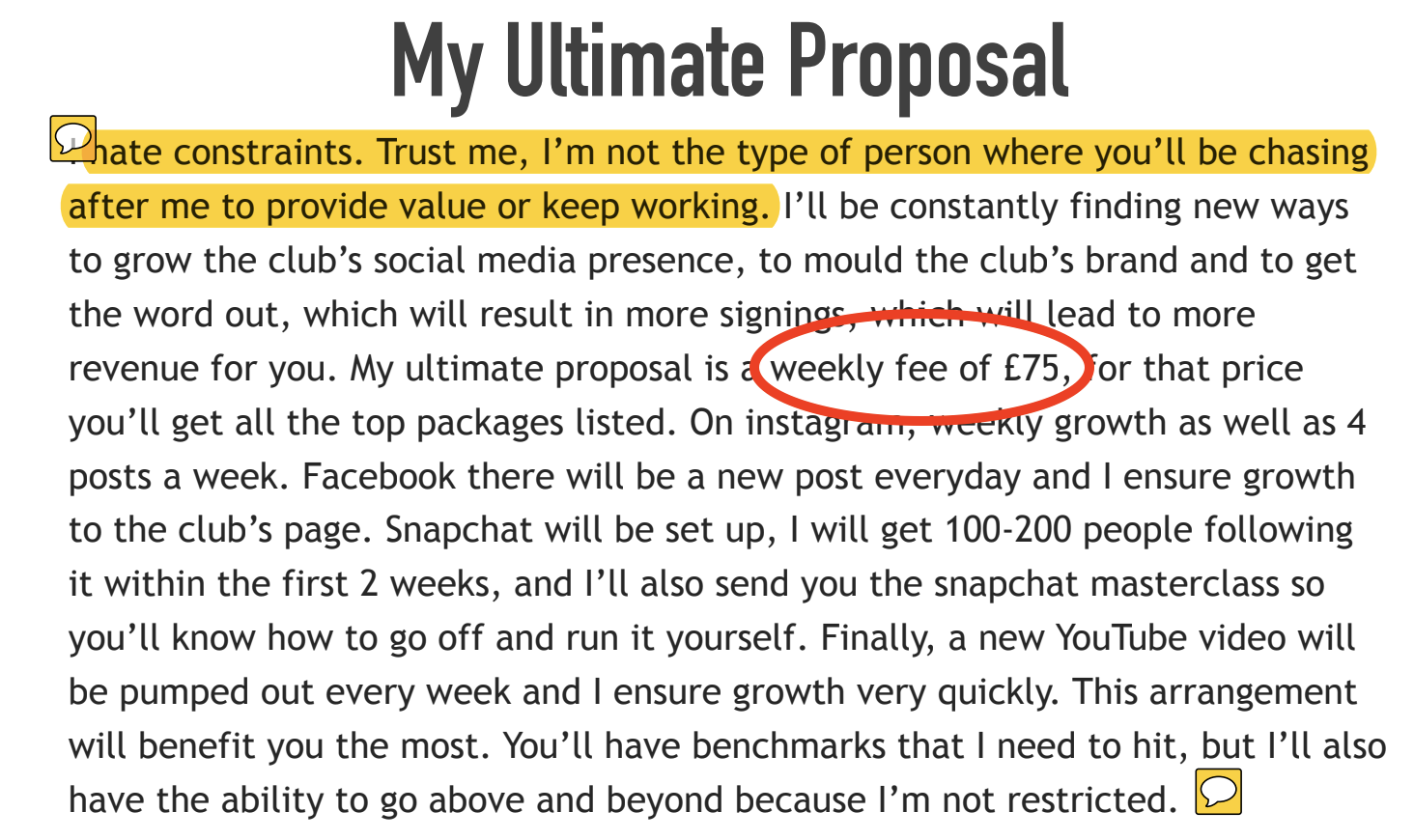 It really didn’t matter if that first retainer was £1/pm or £300/pm. It gave me the greatest gift I could have ever gotten at the time, hope.

It was the first time in my life that I had recurring income and could finally say ‘my client’ (something I still find cool to this day).

It was an entire seven months until I got my next client. Most people would have given up at that point… but I was hooked.

I kept pressing and pressing until I finally landed a meeting with a company called Aflete.

I showed up to their swanky London office and instantly felt chills down my spine. By the end of the meeting, the Founder (Shan) was asking me to send over a proposal.

Now I had a bit more idea about what I could charge, and what other companies did too, so I sent over a quote for £1,900 a month, a number that I threw out with expectations of negotiation down to something like £1,000.

I sent it off while I was sitting IN class at school. As I left for lunch break, I refreshed my email and Shan had written back with just two words… ‘Call me’.

I remember sitting on the curb of the street outside the school, using my phone as a hotspot with my computer in front of me. Shan went through some logistical issues but finally ended with… ‘Okay, let’s do it’. 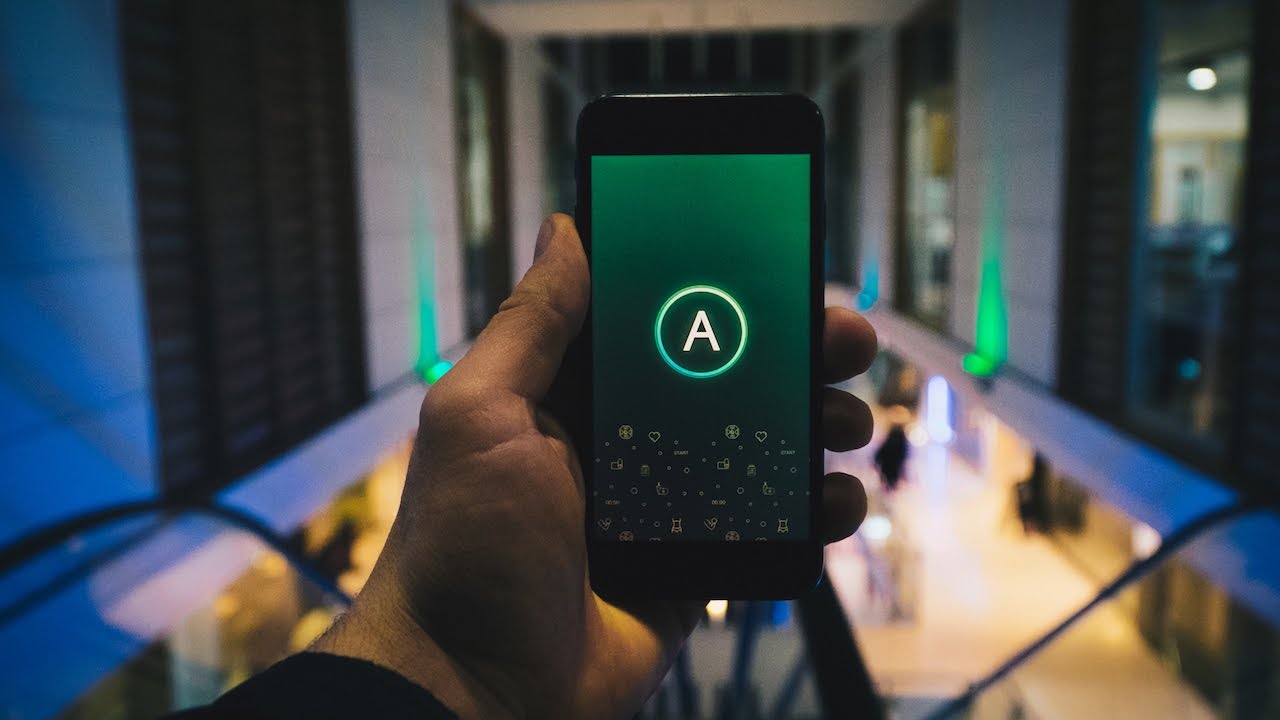 I couldn’t believe what I was hearing…

I ran inside to the lunch cafeteria and hugged my best friend. The entire hall looked at me as I was screaming & shouting in victory.

This was the turning point in my agency career.

The next two weeks were to be even crazier. I went on to sign my second client for £1,500 and then another for £750. Within 14 days I went from £300/pm with a horribly underpriced client (that I dropped straight after) to £4,150 per month with three clients while I was still in High School.

This was the kick I needed and I knew it was time to fulfill a promise I made to myself almost 3 weeks prior.

Three weeks prior to signing Aflete, I promised myself that if I could get enough clients on a monthly retainer to cover my overheads plus rent (which I didn’t have to pay for at the time), then I would drop out of school.

After signing Aflete and the two clients all within 14 days, I had hit the number that I needed to in order to drop out. Now came the logistical nightmare of going to the council, pleading with my school and finding a way to drop out at the age of 17. 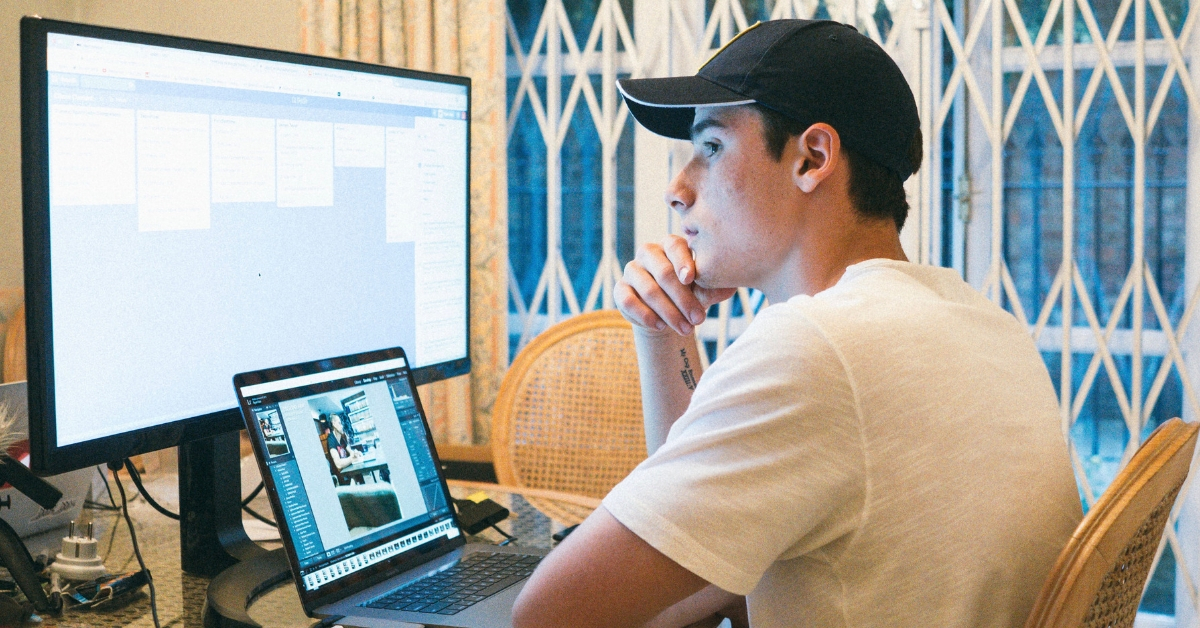 After 2-3 weeks I had made it work and I was showing up to school for my final day ever.

I’ve never felt more anxiety and doubt in my life than when I dropped out of school.

I remember walking around the Boltons in London looking at the houses filled with tears in my eyes wondering if I was about to throw away the education that my mom had sacrificed her entire life for.

Not long after dropping out, I went on to land more clients: ZebraFuel & FuroSystems. At this point, I was beyond the six-figure threshold and I was absolutely walking on clouds.

Then everything came crashing down.

I started to lose clients.

I had no way of proving an ROI – I was offering social media management and gleefully reporting on ‘likes’ and ‘followers’.

To my clients, it seemed, there was only one way of demonstrably growing their business using social media.

So I spend the next six months selling Facebook ads services and failing every damn time.

I tried everything I could to make it work: I bought all the courses & worked with a bunch of coaches. 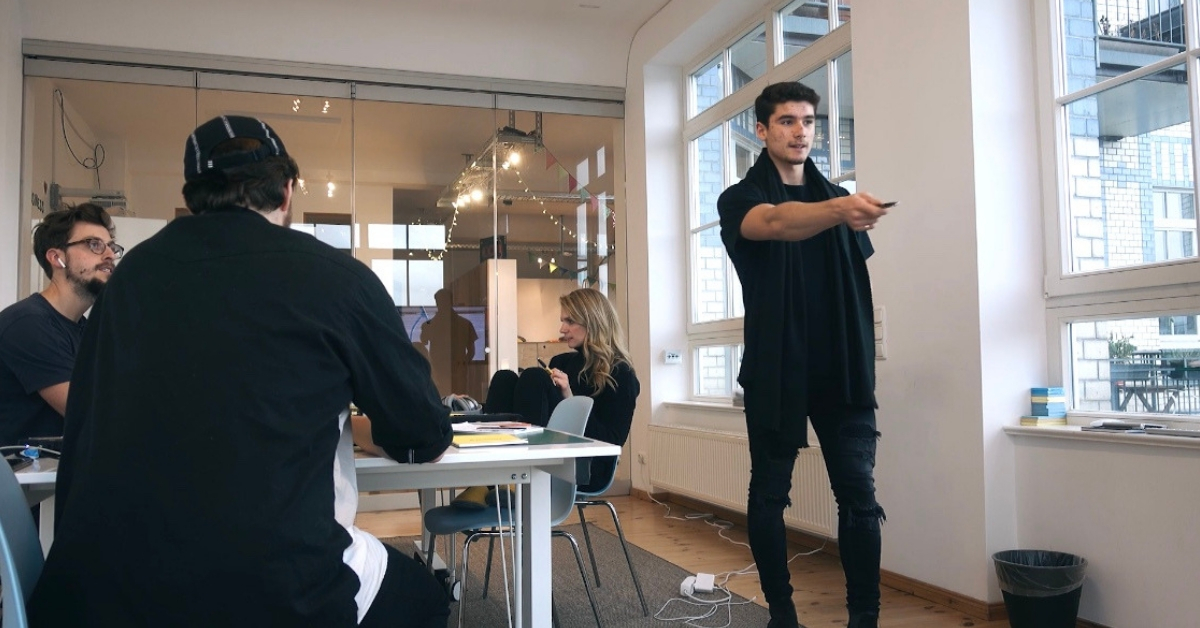 It was only when I turned on my laptop one day, typed in ‘Expedia’ to book a surprise holiday for my mom when I saw that Expedia had made $10 Billion that year with an incredibly lean operation.

As I started to read the article it became clear to me what Expedia’s business model was: connect the customer with the service and wrap it under the ‘Expedia’ experience. Expedia owned zero planes & zero hotels yet it made more profits than the businesses that did!

At that moment it clicked. I didn’t actually have to deliver the Facebook ad services myself, I could get someone else to deliver it and I could focus on sales and operations. The best bit is that I would take home the majority of the profits…

The Start of My Vision

As my agency grew, and I was less than discrete with my new found wealth, a couple of people started to notice how well things were going for me: I’d been documenting my life on Instagram and YouTube for some time.

And then one day, I met up with a YouTube subscriber and he asked me if I could show him how I’d built my agency.

I told him of course, but he insisted on asking me ‘how much do you charge an hour?’

This was brand new to me. I’d provided services to companies before, but I’d never been consulted on how to grow an agency – that seemed absurd!

That very same student, after only two hours of my ‘coaching’ went on to sign his first $1,500/pm client.

And boy did I…

But there’s only so much time in the day you can dedicate to teaching others without forgetting how to do it yourself, so I devised a solution. A program – a simple, step-by-step formula that anyone could follow to build their agency. And so, on February 1st, 2018 after working with a test group of fifty students, I released Six Figure SMMA.

Suddenly, I had created something much bigger than myself.

Within twelve months of the course being released, we had over 1,100 customers enrolled. 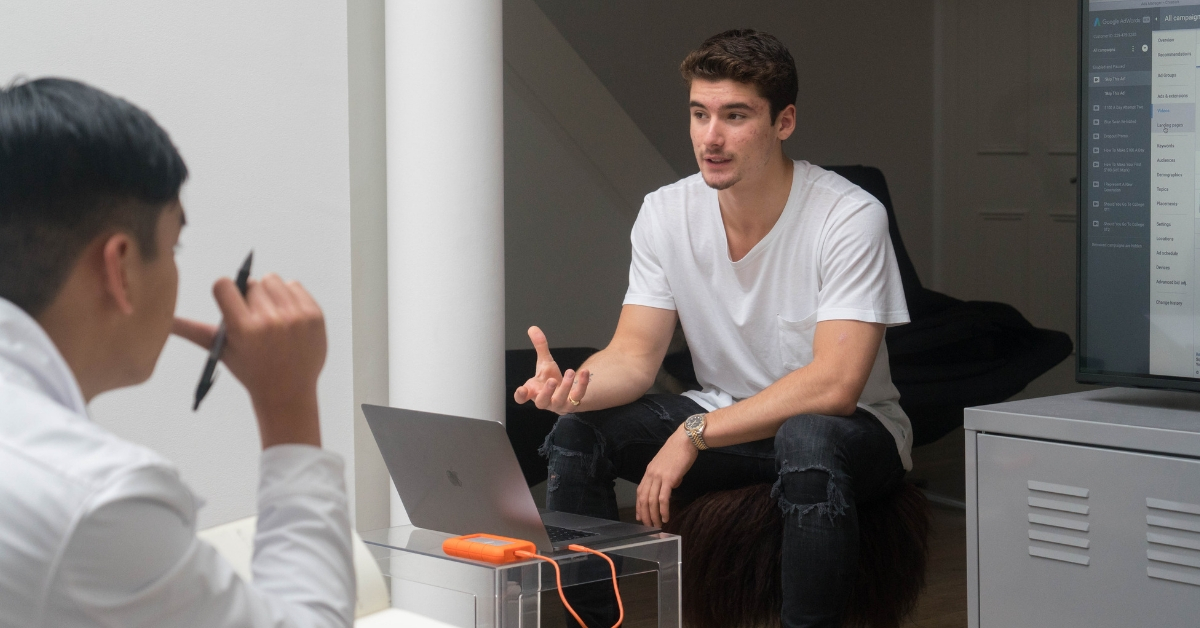 This coincided with an intense alignment of my passion & purpose. I realized that most of the problems our modern world faces can be fixed with the right education.

Most people can’t operate out of abundance, they can’t contribute to the world if they’re thinking about how to pay their bills.

I made a commitment to myself that I was going to use my experience and talent to build genuinely practicable online courses and revolutionize education through e-learning.

What this didn’t mean is that I gave up my agency. It’s always annoyed me that some ‘gurus’ will teach, having gleefully run away from the thing they claim to be an expert in.

As long as I teach, I’ll be testing my course on myself before I let students take the risk.

It was the amalgamation of the courses I had previously offered, and the new home to Agency Incubator, our flagship program.

GrowYourAgency.com now operates with a single mission, expanded from my own: to reform the education system by creating the best online programs the world has ever seen.

But staying true to our ethos and our full circle approach, we’re going to go one step further. I have made a commitment to take 10% of our annual profits to build schools in the developing world –

I’ve made a commitment to take 10% of yearly company profits & put the money straight into building schools in underdeveloped countries.

It’s been one hell of a ride, but I’ve only just started.

GrowYourAgency.com is going to explode – and there’s one person I want to grow with it.

It all starts here: